An Interview with Ted Nesseth

The Heavenly States, an indie-rock quartet based out of Austin, Texas, will make their return appearance at this year’s DubuqueFest Fine Arts Festival, sharing their original music in a free performance under the stars on the Town Clock stage on Saturday, May 18 at 9 p.m.

The heart of the group, husband and wife songwriting team Ted Nesseth and Genevieve Gagon, first performed at DubuqueFest in 2008. The band’s current lineup features Ted on guitar, Gen on keyboard and violin, and includes Benjamin Howard on bass guitar and Gray Parsons on drums, with all four contributing vocals to the band’s unique and crowd-pleasing sound.

Looking forward to returning to Dubuque, Nesseth said, “We made it a requirement on each of our tours to make sure that we came back because we had so much fun, and it just kind of built from there. We found it to be one of our favorite places to play on every tour that we did. It’s a beautiful town.”

Guitarist and songwriter Ted Nesseth grew up in Owatonna, Minnesota, about 90 miles north of the Iowa border. The band got its start during his 15 years in Oakland, California. About a year ago, he and his wife and bandmate, Gen, moved to Austin, Texas. “We put a new rhythm section together. We’ve got some really great people playing with us now.”

In the new incarnation, The Heavenly States are in the process of making their 5th full-length record, titled “We’re All Gonna Die” (to be released in early 2014), with Ted and Gen working together as a songwriting team. “We write all of the music and the words together.” He joked, “It’s Lennon and McCartney with less fighting.”

For this album, they’ve changed song-writing roles. While he initiated the music and lyrics on previous albums, “Gen would swoop in and really focus on solidifying the theme, making sure that there’s a very specific point being sung. She really worked on the content, and then it became much more a collaboration. But in this new record, she’s writing a lot of the words already, and she’s writing some of her own songs, and then I’m kind of swooping in and polishing things.”

Making a change in their creative process “expands the places the band has gone musically. Whenever you venture out into new territory, you put that mood or experience under your belt and you get to grow as an artist.” 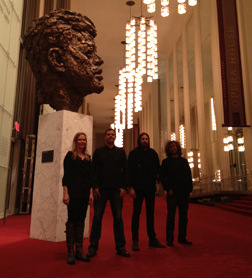 The band has a history of venturing out to perilous territory. On a tour of Egypt and Libya in 2005, they experienced firsthand the vise-grip of suppression when Western music was officially banned. After their concerts were cancelled, it took the intervention of a British government consul to gain permission to play. “It turned out to be amazing, although it was pretty scary at first.”

Another of many past achievements was recording a split single on vinyl with Grammy-winning British group, Coldplay. The Heavenly States’ song “Vacant” was countered by Coldplay’s acoustic version of “Clocks.” Ted admits he haunts eBay for copies of the rare single, whose distribution was limited to 777.

During this year’s DubuqueFest performance on the Town Clock stage, festival-goers will hear “a mixture of new stuff and stuff from all the records, since we’ve been playing there since the first record we put out. I think a lot of the people that will come and see us are familiar with all of the records, and that’s always fun for us too because we have to go deep into the catalog and figure out, ok, what do people love about this record?”

When asked to describe the music, Ted said, “First and foremost, I think the words are the most important thing for us, so I think that the people that get us the most connect with the words. We do our best to try to tell good stories or ask very specific, pointed questions. Listening to The Heavenly States is not background music, but it requires as much engagement from the audience as it does from the performer. The people that really like the band engage in the music as much as we do.” 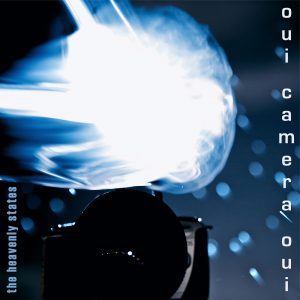 He explained that the lyrics to “The Berlin Wall” (from the 2011 album Oui Camera Oui) reflect on what we do with monuments to horrific events. “The monument somehow replaces the detail and the nuances of those tragedies, therefore dulling the sense to the events that occurred. So Berlin Wall is all about the idea that I can’t really embrace these monuments because they cover the truth of what really went down.”

In comparison, Ted explained, the song “Oui Camera Oui” talks about “a relationship where two people are living together but living independent lives.” The George and Martha characters are borrowed from the 1966 film, ‘Who’s Afraid of Virginia Woolf,’ starring Elizabeth Taylor and Richard Burton. In the Heavenly States’ lyrics, the mismatched pair ride a bicycle, and “he never holds her / she never holds on.”

Ted is enthusiastic about playing in Dubuque this time around. “It’s our first little tour with the new rhythm section, and I’m excited for us to come and repeat the 2008 fun.”

You can listen to the music of The Heavenly States during a free performance at DubuqueFest Fine Arts Festival on the Town Clock stage on Saturday, May 18 at 9 p.m. A post-festival performance will start at 10 p.m. at The Lift, 180 Main St. (doors open at 9 p.m. with a $5 cover).  Learn more about The Heavenly States on their website at www.theheavenlystates.com or find them on Facebook.

For a full schedule of music and fine arts events at the 2013 DubuqueFest Fine Arts Festival, visit DubuqueFest.org. Stay up to the minute on festival happenings by “Liking” the DubuqueFest page on Facebook or following DubuqueFest on Twitter.