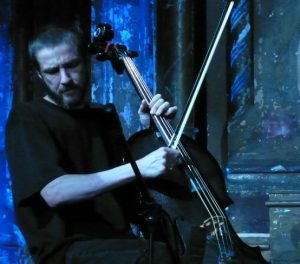 Cellist Fred Lonberg-Holm is one of the more diverse players in modern improvised music. Based in Chicago, he has collaborated with anti-rockers U.S. Maple, MacArthur Genius Grant recipient Ken Vandermark, and legendary reedmen Joe McPhee and Peter Brotzmann, among a who’s who of jazz and rock luminaries.

Dubuque has hosted Lonberg-Holm several times previously at Monk’s Kaffee Pub and Off Minor, performing everything from hard-bop variants in the Valentine Trio to dense sound sculptures with the Friction Brothers. On Saturday, May 19, Lonberg-Holm brings his new ensemble, Stirrup, to town for two performances. Stirrup opens for the Chicago Afrobeat Project beneath the Town Clock at DubuqueFest, then plays later that evening a block away at Off Minor, in a post-DubuqueFest show at 10:30 p.m.

Listen to the music of Stirrup

Update: Swedish trumpter Emil Strandberg will be appearing with Stirrup. Check out more about Emil here or preview his music here.

[This article originally appeared in 365ink from Dubuque365.com].