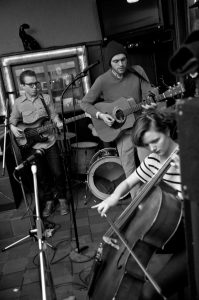 Pioneer, a folk rock quartet with haunting melodies and lilting harmonies, will kick off the 2012 DubuqueFest Fine Arts Festival, performing on the Town Clock Main Stage on Friday, May 18 at 5 p.m. The Madison-based group will perform original music written by acoustic guitarist and songwriter Kenny Monroe, featuring the cello and vocals of classically-trained cellist Jacqueline Kursel, drums and percussion by Shawn Pierce, and the bass guitar and vocals of Tyler Ditter.

The folk-inspired music of Pioneer, interwoven with intricate guitar, cello and bass, and precise drum work, tells stories of love, loss, memory and Midwestern people and places. Kenny says, “I grew up near upper Michigan and was familiar from a young age with the vibrant lower Michigan folk scene, which to this day remains my biggest influence.” After moving to Madison in 2007, Kenny met Tyler and Shawn, who would eventually become the Pioneer bassist and drummer.

The idea of integrating a cello into the band was modeled after the instrumentation of Michigan songwriter Matt Jones, whom Kenny calls, “my favorite song writer of all time. He’s why I wanted to start playing seriously.” The band known as Pioneer really took off once he met Jacqueline.

“In June of 2010, I met Jackie, the Pioneer cellist (on a blind date actually) and we hit it off immediately, romantically and musically. Soon thereafter we were playing together as a duo. Eventually we decided that we would like to start to build a band. After a few false starts and some line-up changes, we started playing with Shawn and then Tyler a bit later, and it was an instant chemistry that we all felt great about. We had our first official full band show on Labor Day of 2011 at the Rock County Folk Symposium in Janesville, WI. And the rest is history. We’re currently working on our debut album as well as a bunch of new material.”

Their 4-track demo album, available at www.pioneer.bandcamp.com, was created from filmed live performances. “The song ‘Memorial Day’ – I wrote that song when I was visiting my home town in northern Wisconsin on Memorial Day weekend. There’s a little bit about the general sense that you get in rural places that there’s a lack of economic opportunity.” Pioneer is also polishing a studio album with psychedelic overtones and what Kenny calls “weirder instruments.” Their DubuqueFest performance will include songs from both albums, in addition to a few Neil Young covers.

Kenny serves as songwriter for the group’s original music, with the instrumental arrangements a joint endeavor. “Everyone helps with arranging the songs but I do the lyrics and the general structure.” The lyrics borrow themes from his life and are “a general representation of how I’m feeling about a few different things at the time. Nothing’s overly political, but it’s part of the songs because I’m a politically active person.”

His song lyrics are “ambiguous, can mean different things, depending on what part of the song you listen to, or what sticks out to you personally. I try to approach it from a way where I bring in some personal things, love and loss.” The cello fits naturally within the mix, adding its elongated tones to the folk-driven melodies.

Pioneer will open its DubuqueFest set with a tune called “Summertime,” featuring Jackie in an introductory cello solo. Listeners will also be treated to tunes that Pioneer has never before performed onstage, such as “Rio Grande Valley” and “A Matter of Time.” 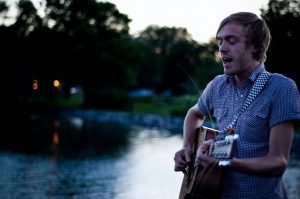 “I think the music is dynamic,” says Kenny. “The songs have different moving parts, it’s pretty intricate, and there’s a lot of melodies going on at the same time, with the cello being a melodic instrument.” Kenny’s finger picking on the acoustic guitar is steadied by bassist Tyler’s musical background as a euphonium player. The end result is imminently listenable. “All the stuff is catchy, that’s very important to me, I like writing melodies.”

Kenny is eager to bring Pioneer to DubuqueFest. “I hope people are excited. It seems like a really cool festival, and I love playing outside.” He urges festival goers, “Show up at the beginning, cause we’re opening. I’m excited to see Dubuque. And anyone who wants to talk to us and give us any suggestions about what we must see, cause we’re all very into checking out as much as possible for as long as we’re in the city. We love to try local restaurants and see what people like, and get a sense of the place.”

Pioneer’s 5 p.m. kickoff performance on Friday May 18, 2012 on the Town Clock Main Stage will be followed by a spectacular slate of four performances on two stages, for a nonstop musical experience. JJ Schmitz Experience will perform at 6:15; White Mystery at 7 p.m.; Ida Jo & the Show at 7:45 p.m.; and topping off the evening, headliner Andy Frasco and the UN will take the stage at 8:15 p.m. The festival will continue with more music on Saturday. For complete details, see the DubuqueFest Music Schedule, or for the most current news, “like” the DubuqueFest Facebook page.